What is the International Lighthouse & Lightship Weekend?

The ILLW is an annual amateur radio weekend, held on the third full weekend in August.

Its basic objective is to promote public awareness of lighthouses and lightships and their need for preservation and restoration, and at the same time to promote amateur radio and to foster International Goodwill.

The ILLW is not a contest.  There are no prizes, certificates, or other enticements to participate.

The event was started in Scotland in 1993 by John, GM4OOU, and the late Mike Dalrymple GM4SUC of the Ayr Amateur Radio Group.

The ILLW is held on the 3rd full weekend in August starting at 0001 UTC on Saturday and finishing at 2350 UTC on Sunday.

Lighthouses are fast becoming an endangered species with the introduction of Global Positioning Systems and Satellite Navigation and the automation of the light source to solar power which has resulted in the withdrawal of management personnel (lighthouse keepers).  It is hoped that this event will highlight this situation and help prevent further desecration of thse magnificent structures all around the world.
The event came into being from the Northern Lighthouse Activity Weekend, first held in Scotland in 1993.  The first years event saw 10 stations established in Scotland and the Isle of Man.

Over the past 15 years, the ILLW has continued to grow, with some 85 countries having been represented since its inception.

In 1998 there were 158 lighthouse/lightship stations in 40 countries.

This year (2016) there are a total of 430 lighthouses entered for the ILLW event. 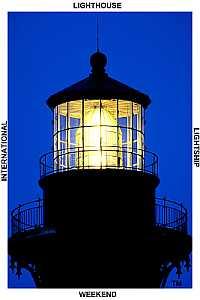 More information can be found on the ILLW website at.....